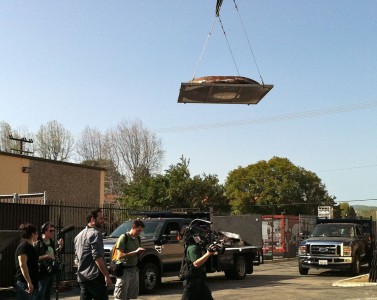 Yes, that’s a monster donut being hoisted around by a crane…
There are some things in life one never expects to do, and one of them is making a giant donut for a TV show for Food Network. This is the story of how I ended up doing exactly that. (Television, as I’ve written before, is a very, very weird place.)

Last fall, while on book tour for my book Cooking for Geeks, I received a call from a casting agent who was looking for a “food science geek” for “a network that deals with food” (*cough* Food Network *cough*). They were creating a show about two chefs who get into crazy bets with each other and calling it Monster Kitchen. Upon accepting the challenge, each chef would head back to their respective kitchens and, with the help of a pastry chef and a food geek, attempt to pull off the challenge.

It’s a fun spin on a reality TV competition with the potential of getting a MythBusters / Food Detectives-like angle on what’s happening scientifically. The exciting bit for me is to get people to think scientifically in the kitchen. Not sure how to make a giant donut? Break it down: can you make a one foot donut? What works at that scale, and what fails?

After some quick online reading—yes, a baked donut can still qualify as a donut; there are two types of donuts: yeast donuts and cake donuts—I came up with a plan. We’d make a mold in the shape of a donut, mix up the donut batter in a cement mixer, bake it in an industrial powder-coating oven, then fry it in a dumpster. Then fill it with Chef Eric Greenspan’s egg-cream custard. And glaze it. And top it off with Greenspan’s “pièce de résistance”: chocolate-dipped bacon as the extra-large sprinkles. Yum!

The Mold. We wanted the donut to look like, well, a donut. Sure, we could have gone to a quarter mile race track, created a oil trough around the entire peremiter, and piped in donut batter to make a donut that was a quarter mile circumfrence… and 1″ diameter. That’d be lame.

Our donut was going to be to proper scale: the hole in the middle should be roughly the same size as the height of the donut. The cross-section of the donut should be round (a circle), not a rectangle (that’d be a washer-shaped donut, not a torus-shaped donut.) That pretty quickly ruled out almost every other option: we’d have to create some sort of mold to hold to donut batter. (One other possibility: autoclave. Maybe if we go to series and have a re-match…)

But how to make a giant mold? One that was both heat-safe and food-safe? Silicone molds are often used in food, but the curing time alone would be too long for a few-day challenge. Plaster is used in molds for chocolate making; even better, they make plaster bandages, which are sheets or rolls of gauze coated with plaster powder. Wet, lay on surface that you want to make a mold of, and wait a few hours, and bingo: a hard cast that’s heat safe. (Medical grade plaster bandages would even be theoretically food safe; we went for art grade and lined the mold with parchment paper to avoid direct contact; problem solved.)

We still needed a “positive,” mold-making lingo for the item that provides the original form from which the mold is made. We could make the donut in parts and assemble it together, like a layered cake, but that somehow felt wrong. It should be one big donut, not a bunch of pieces glued together with frosting. Since donuts are torus shaped (see wikipedia’s torus page), we’d need something that was a torus. We could make our own positive—even crumpling up aluminum foil into the rough shape—but making a five foot version would be tricky at best. Could we find something that was already torus shaped that was large enough? Tires. Intertubes. White-water rafting tubes. After an admittedly grueling phone and internet hunt (thanks Chris!), we found a tire tube that was just over 5′ in diameter. Bingo! We had material to make a true torus-shaped mold and something to fabricate the mold around.

To make your own mold: take your “positive,” whether that’s aluminum foil you’ve crumpled up into the shape of a donut or a small inflatable pool float, and cover with crisco. Cut your plaster bandages into strips, several feet in length; wet down, then wrap around the mold. Repeat until the entire tube is covered, at least four or five times. In the show, the mold was wrapped eight to ten times; that was just barely enough for that size. Allow to completely cure—ideally 24 to 48 hours—then cut the mold in half around the middle. I used an angle grinder (wear a dust mask and eye protection!). P.S.: Make sure your mold will fit in your oven before spending hours and hours of time making it!

The Donut Batter. The other early decision we made was the type of donut batter: yeast donut, or cake batter donut? Yeast donuts taste better to me, personally, but given the size and scaling issues, would probably not rise properly and collapse under their own weight. We decided to use a cake donut batter so that we wouldn’t have to worry about properly incubating and rising the yeast.

Here’s the recipe Pastry Chef Amy Brown came up with (the standard recipe will make about a dozen regular, non-Monster sized donuts, around 3″ or 4″ diameter), plus my notes on the quantities needed for a 1′ and 5′ donut.

Baking & Frying. Now that we have the mold and recipe parts out of the way, the rest of it is “just” cooking it, right? Hahaha. Haha hah haa. I wish. Just bake until the inside reaches around 185°F, then fry in oil at around 350-375°F to get a nice outside. Ponder the following questions to get an idea of what’s involved:

And the one question I failed to get someone to calculate for me?

It’s this last question that in hindsight should have been really obvious to ask. I figured with redundant probe theremometers (there’s a phrase I never thought I’d write), I wouldn’t have to take any guesses as to when the donut was done and that I could just pull it out when ready: internal temperature above 180°F, ideally around 185°F.

We put it into the oven around 7 PM. My guess was that it would take around 6 hours at 300°F. 6 hours in, the probe thermometers showed the donut still had another ~40°F to rise, so I cranked up the temperature on the oven. It ended up taking double that—just over 12 hours—to get the donut cooked. Just before 7 am the center of the donut hit 180°F. We called it done and drove straight back to the kitchen to make it there by the 8 am call time. (I can now include myself and my producer, Chris, in the rare set of people who can truthfully say they stayed up all night watching a donut rise.)

I was beyond delighted when we pulled off the mold and tasted the donut. It was incredible. Moist. Delicious. Transfer to the crane to hoist into the dumpster (which we had sandblasted—so it was clean steel that was then oiled down… just like a super-large Chinese wok), fry, and then decorate. At least, that was the plan. There was just one tiny little hole in the idea… but for now, you’ll have to watch the show to learn what happened! 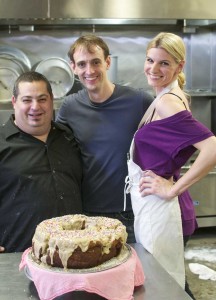