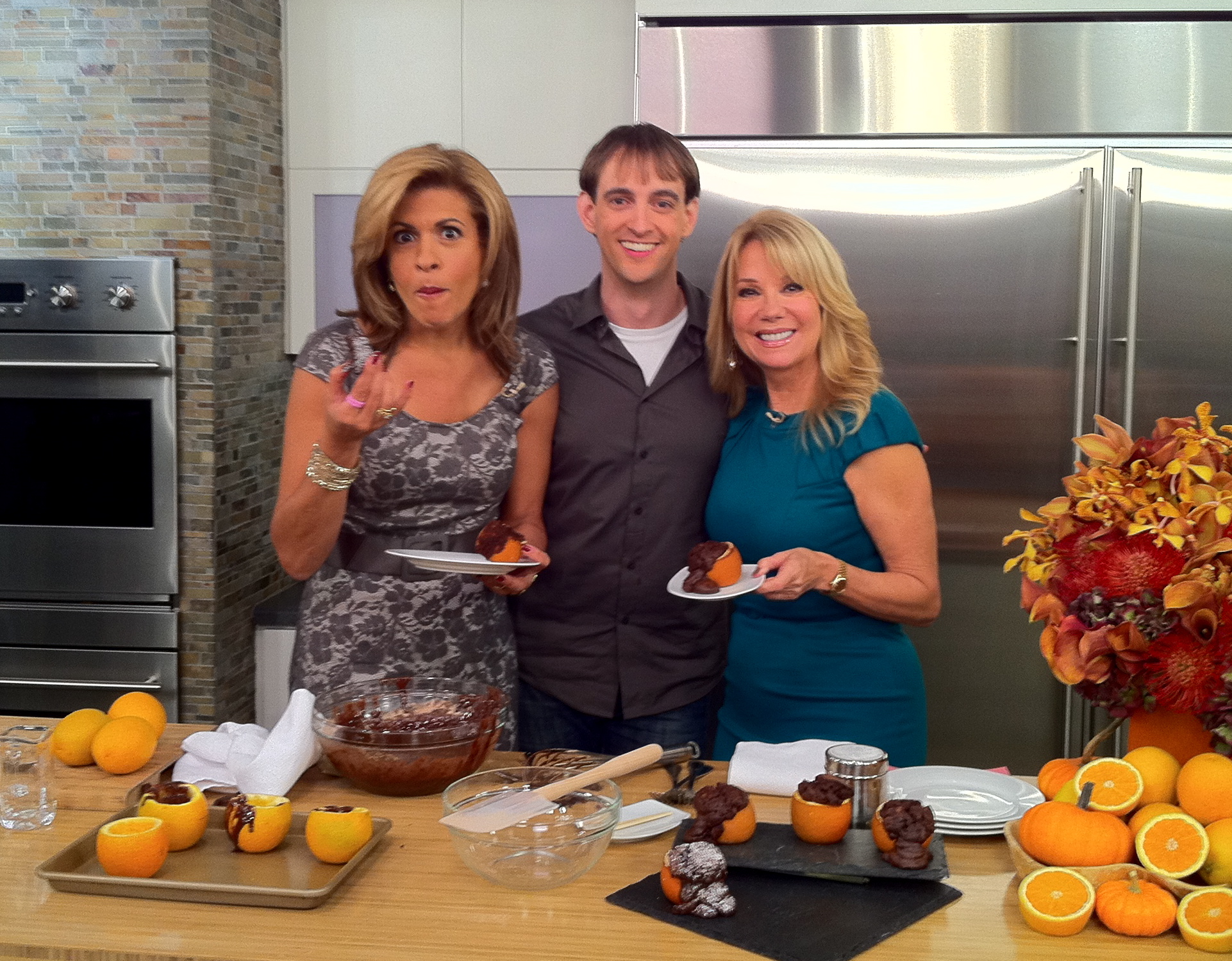 “There’s no biz like show biz”—ain’t that the truth—and live national TV is like nothing else. The Today Show broadcasts 4 hours of live content each day, five days a week. I cannot imagine the amount of work that goes into finding talent and producing content.

What’s it like being a guest on a show like The Today Show? In a word: incredible.

The work started a few weeks before my appearance. A phone call, after seeing the piece on my book in USA Today: “Would you be interested in being on The Today Show?” Of course. Then there’s a flurry of short emails: “What can you show our viewers in five minutes? Something fun, visual, and interesting?” They had a copy of the book and suggested “Brownies In An Orange.” Fun? Check. Visual? Check. Interesting? Depends. There’s not a lot of deep connections to food science here (well, caramelization, oven temp, and how flavors go together). But viewers just want to be entertained, and the producers know what will work on their show. Check.

The day before—4:30 PM. Rehearsal. One of the show’s food stylists (they have two) and the segment producer (they have many) and I meet on-set to do a run through of the segment. Kathie Lee and Hoda aren’t present; this isn’t a full rehearsal. It’s mostly a coaching session and prop run-through. (It’s really awkward to realize you’re missing a whisk or bowl when on live TV with millions of viewers watching.)

Oh, food stylist? Her job is to make sure all the physical objects—bowls, spoons, beauties—are laid out correctly, and actually procure and produce all the actual food. And it’s all real and edible—no “cheats” going on here. The Today Show has an off-set kitchen where they actually cook and prep everything for the guests. I think the only food I touched was the orange I sliced while on camera and the brownie batter I sampled. I didn’t even get to taste the baked one! (Hoda ate the whole thing, I think.)

As for the producer, her job is to make sure that I have a sense of where the segment is supposed to go. What questions might get asked of me? Make sure you give 3 to 4 sentence long answers, not too short! And at all costs, avoid dead silence. Keep talking. Keep it energetic.

Day of—8:30 AM. On-set call time. I was slotted for the 10 am to 11 am hour; but not even the producer of the segment knew what exact time I’d be on, or if they’d need me for teasers (those little “coming up later this hour…” bits). So, 8:30 AM it was. I booked a hotel two blocks away (paper-thin walls—did not sleep well at all!—thank god for hair and makeup).

So yeah, hair and makeup. It makes a difference. It’s weird. First, anti-glare. All over the face. Then they hit you with powder, and brushes, and sponge foams, and I really don’t remember because a) she was fast, and b) I had my eyes closed most the time. The president of a major non-profit was sitting to my right going through the same thing. To my left was a kinda-cute dancer. I chatted with the makeup person—”You must see an amazing number of interesting people”—”Yup!”—and then she booted me back to the green room. Someone tells me “wow, you don’t even look like you have makeup on!” Which makes me wonder: is that a compliment or insult? She said it was a compliment. I take her word for it; filing it away to puzzle over later.

One detail: there are TVs everywhere. With HUGE RED CLOCKS RIGHT BELOW THEM THAT YOU CAN’T MISS. This is f’ing mission control. Every room. The studio itself is multiple sets, split over two, maybe three floors. Next to the green room is the mic room—really, mic broom closet—where they have something like 200+ wireless microphones all racked up on their charging stations. I peaked into the control room itself. If you’ve seen the movie The Truman Show, that’s along the right lines, only The Today Show’s control room is way more impressive. There’s something like 25+ people in there—the EP (executive producer) all the way down to the current segment producer. Camera feeds in from everywhere. (With so many different sets in the studio, they have different cameras at each set.) I have no idea how they manage their audio feeds.

We sit and wait in the green room for another hour. I chat with someone sitting next to me, she’s the president of UNICEF. They call her, she walks out of the room… and onto the TV screen we’re watching. Does her thing; very comfortable; then walks off the TV screen… and back into the green room. This repeats itself half a dozen times. It begins to feel normal.

I walk into the kitchen set, and wow. Sometime 6 PM the night before and day of, an art director had taken a pass. Oranges cut in half, beautifully piled up next to tiny pumpkins. Beautiful arrangement of flowers. The works. It looked fantastic; magazine-cover like. 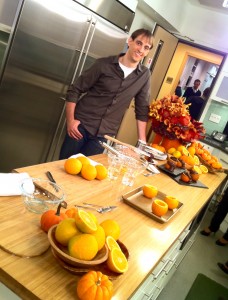 10:30 AM. The producer and food stylist walk in. Another guy—maybe a camera operator? or segment director?—is also there. I yank the plastic wrap off the bowl. The producer reminds me: make sure to give direction to Kathie Lee and Hoda to mix the brownies. I’ll be demoing how to slice up the orange while the two of them mix the brownie batter. I secretly hope that the three of us end up just eating brownie mix, which I think would be really funny.

10:40 AM. It starts getting a bit crowded. People are flowing into the room. The audio guy hands me a mic. I’ve done enough of this by now to know to clip it to my left side, since I’m facing left. I ask the producer “Do I need to do a level check?”—”No, no, they’ve got you.”

10:41 AM. More people flow in. It’s a stampede. The entire crew has to run between sets during commercial breaks. Hoda and Kathie Lee included. Everything’s surprisingly calm, almost casual, although there is a very serious professionalism around this crew. They’re there to do their jobs; and have fun doing it. Everyone from the top down is spot-on to work with; everyone has their roles; everyone knows who to hand off questions to. With live TV, you have to be easy to work with, it’s clear.

10:44. Kathie Lee and Hoda walk in. Actually, I don’t remember, they might have run. This is where my memory starts to get fuzzy. The situation has so much—pressure?—that’s not actually the right word; it’s just that it’s so well-structured that you can flip into auto-pilot mode almost. It’s like running: you can’t really think about it as putting one foot in front of the other, your mind is working at a higher level than the mechanics of how it works.

10:45. Kathie Lee, Hoda, and I are chatting. It’s mostly “So what are we doing here?”—”Making brownies in an orange. Thanks for having me on!”—”Oh of course.” I say something about the SNL parodies of them. Some guy starts calling out numbers while we chat about random stuff for 60 the next minute or so, mostly I think just to get a sense of 30 what our rapport is like. I’d watched about four hours of YouTube clips 15 the night before of the two of them—learning to play volleyball (under studio lights—yikes), getting bird-poop facials, being entertaining—so felt like 10 I had a pretty good sense 5 of them. 3 (2) (1)

10:46.They snap their heads to the teleprompter and read off the script. We’re live. My heart has dropped out of me. I hadn’t been nervous until the guy called out 5 and I realized that We. Were. Doing. This. Now. I’m not actually nervous with this stuff anymore; it’s more the feeling one gets while standing on a high bridge: you know you can’t actually fall, but your body just says “this isn’t naturalllll” and the reptilian portion of your brain manages to rear its head anyway. There’s absolutely nothing natural about having two news anchors standing to your left while looking forward into a bunch of weird-looking gear and trying to pretend like it’s absolutely normal. “Oh this? Like having coffee in the morning. I do it every day!” 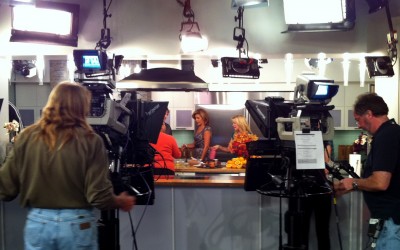 Which is actually the secret to TV. Do your homework; know exactly what you’re going to be doing; know exactly what might go wrong (in my case, my number one fear was that I might cut myself with the knife and de-rail the segment). And then, convince the reptilian portion of your brain—the part that dumps adrenaline into the bloodstream—that it’s actually not important, and thus, nothing to be afraid of.

10:50. We’re done. I don’t actually remember any of it. At all. Except that I licked the brownie batter, twice (trying to be a little bit goofy to cancel out any appearance of looking uncomfortable). And that Kathie Lee Gifford called me ADORABLE on national TV. 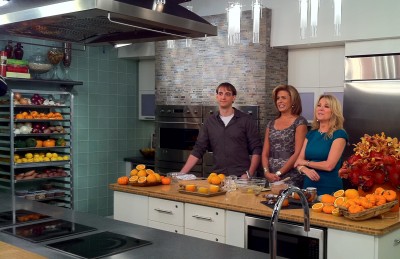 I’m later told that I was good. Friends and family who’ve watched it have complimented me—apparently I’m a natural—but I haven’t had time to actually watch the clip yet. I’ll do it after writing this, but wanted to get my memories written down before seeing it.