Q: What’s the book about?

A: Cooking. But it’s not a cookbook per se; it’s a book about cooking. I usually tell people it’s “a compendium of food science, interviews, and experiments, with recipes to tie it all together.” But then one of my friends pointed out that it’s really much more about a mindset, about an approach to the kitchen.

Traditional cookbooks are collections of recipes, which are really just notes on quantity, technique, time, and temperature, but don’t give you the knowledge you need to go “off-recipe.” Cooking for Geeks is written to apply to anyone who likes to think about how things work, even if they don’t consider themselves a “geek.” It’s the book I wish I had when I first started learning how to cook.

A: Anyone who likes to get into the details of how things work. For you visual thinkers, here’s a pretty Venn diagram: 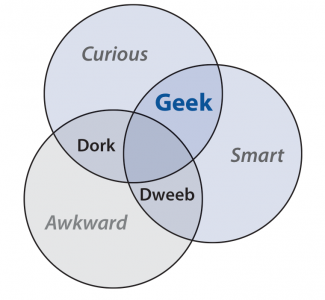 Q: Who are you? How’d you get into cooking?

A: Well, I’m the “Geek” in “Cooking for Geeks.”  My background is software engineering; I’ve worked with a number of web and tech startup companies since graduating from college.

When it comes to cooking, I don’t have any formal culinary training, which means I’ve hit the same stumbling blocks that most of us encounter while trying to learn how to cook. My parents always took time to cook, and growing up, it’s just something I was around. When I went off to college I realized that there was a lot of basic cooking that I didn’t know how to do. (Spaghetti and salmon turns out to not be such a good combo.) I spent a decade experimenting and learning, and wrote the book based on my experiences, thinking about the book that I’d have wanted ten years ago.

Q: What the heck are you doing in the photo to the right?

You can also make strongly alcoholic ice cream this way, because the freezing point of ethanol is way, way above the boiling point of nitrogen. Just be sure to check the temperature of the ice cream before eating it—wouldn’t want to freeze anyone’s tongue! Wistful look.

Q: I have another question.

A: Contact me, and I’ll do my best to reply!