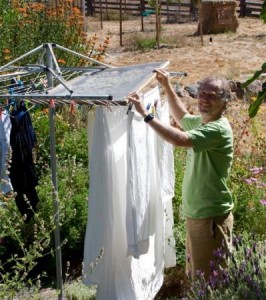 Tim shows his method for drying apple rings in the hot California sun.

For his recently released book, Cooking for Geeks, author Jeff Potter interviewed prominent researchers, food scientists, knife experts, chefs, writers, and more, including author Harold McGee, TV personality Adam Savage, and chemist Hervé This. Some provided recipes, others offered tips and tricks, and each brought his or her own geeky insights into the space where science and cooking meet. In one case, the contribution was a comic (by Randall Munroe of xkcd). As you can imagine, while preparing the book, Jeff had access to a geek whose name is eponymous with the company that published his book. The excerpt from Cooking for Geeks that follows includes part of their conversation, along with the recipe for Tim’s now-famous homemade scones.

Jeff: You say you don’t consider yourself a foodie at all?

Tim: No. In fact, I kind of make a small number of things that I make repetitively. A lot of what I do is driven by the fact that I hate to waste things. So hence jam because there’s all this great fruit. [Tim has numerous fruit trees.] Right now I’m doing dried apples. But let me put these scones in. [Tim had been making scones as we started.] This is something that I figured out a long time ago. I make this big batch and it’s too much for two people so I made a batch and then I was like, oh wait, I can just freeze it.

Jeff: How did the thought of freezing it come to you?

Tim: Oh, I don’t know, it was just sort of like duh. It’s sort of like so obvious. You just make it and freeze it and then I have it and I can throw in a bunch. When somebody visits it literally just takes me a few minutes. The raspberry jam—I have raspberries, but I don’t have enough to make jam all at once, but I’ll go out and pick them every day and now you can see what I’ve now got… [Tim holds up a bag of frozen raspberries.] By the time I get two of these bags I’ll have enough to make raspberry jam. You don’t have to do it all at once.

Tim: I like things that seem magical. When you see this particular apple peeler-corer-slicer, you’ll go, “Oh! That’s so cool! It’s magical.” It just does a fantastic job.

Tim says there are two secrets for making jam:


Warning: number_format() expects parameter 1 to be float, string given in /u/c/cfg/websites/www.cookingforgeeks.com/docroot/wp-includes/functions.php on line 412
thoughts on “Tim O’Reilly’s Jam and Scones”