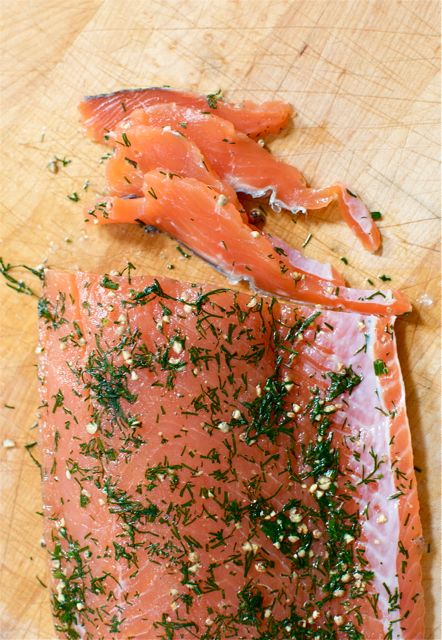 Salt curing has been used for centuries to preserve ﬁsh caught at sea. It’s also easy to do at home! Surrounding ﬁsh with a sufﬁcient quantity of salt draws out the moisture; this is called dry brining. But salt doesn’t just dry out the food (along with any bacteria and parasites). At sufﬁcient concentration, dry brining actively disrupts a cell’s ability to function and kills it, rendering bacteria and parasites nonviable.

In a bowl, mix together:
5 teaspoons (30g) kosher salt
1 tablespoon (12g) sugar
3 tablespoons (12g) ﬁnely chopped fresh dill
1 teaspoon (5 mL) vodka
1 teaspoon (2g) crushed peppercorns (ideally, use a mortar and pestle)
On a large piece of plastic wrap, place:
1 pound (450g) salmon, washed and bones removed; preferably a center cut so that its shape is rectangular
Sprinkle the salt mixture over the ﬁsh and massage it in. Wrap the ﬁsh in plastic and store it in the fridge, ﬂipping and massaging it twice a day for a day or two.
Store it in the fridge and consume within a week. 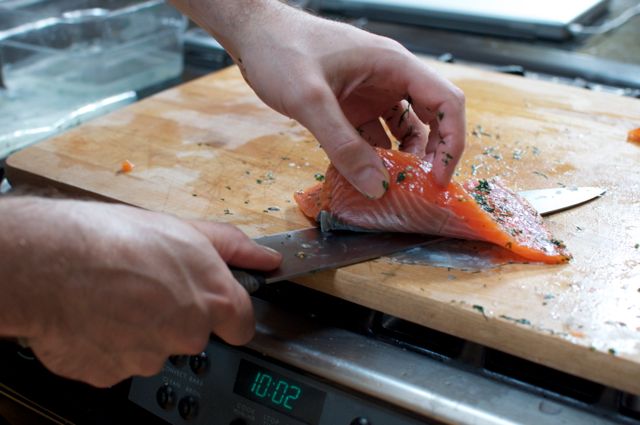 Remove the skin by placing the fish skin-side-down on a cutting board and carefully running a knife along the surface between the skin and flesh while using your hand to keep the fish from sliding around.
Notes
• Vodka is used here as a solvent to dissolve some of the non-water-soluble aromatic compounds. You can substitute other spirits, such as cognac or whiskey, to bring additional ﬂavors in. And in place of dill, try using coriander seed, loose tea leaves (e.g., Earl Grey or Lapsang Souchong), shallots, or lemon zest. The Scandinavians traditionally serve salmon gravlax on top of bread with a mustard dill sauce.
• You can substitute other fatty ﬁsh, such as tuna, for the salmon and obtain a similar texture.
• This recipe is a bit heavy on the salt—6% by weight—to err on the side of safety. You can reduce the saltiness before eating the ﬁsh by rinsing the finished product in fresh water. Curing above 3.5% salt prevents most common bacterial growth, but not all. Modest concentrations of salt prevent Gram-negative bacteria—which are the most common ones found in food—from growing, but won’t handle the few that are Gram-positive, such as Listeria.
• Salt curing—as is done in salmon gravlax— is the ﬁrst step in making lox. After curing, lox is also cold-smoked, which is the process of exposing a food to smoke vapors that have been cooled down. You can approximate the flavor of lox by adding liquid smoke to the rub.