A serious examination of pizza is clearly a must-have for a book called Cooking for Geeks. Pizza covers so many variables: flavor combinations, Maillard reactions, gluten, fermentation, moisture levels, and temperature. We’ve covered most of these elsewhere in the book, but we haven’t yet talked about temperature, which is key to a good crust.

Great thick-crust pizzas have a great interior that comes from good dough that’s baked at moderate temperatures. My local delicious thick-crust pizza place runs its oven at 450°F / 230°C in the winter, 350°F / 180ºC in the summer. (The oven can’t be run any hotter in summer without the kitchen becoming unbearable; they just bake the pizzas longer.) Easy enough.

But if you want to make a crispy thin-crust pizza, high heat is critical for creating a great crust. The lower temperature bound I’ve found acceptable for great flat-crust pizza was 600°F / 315°C. At 700°F / 370°C, the crust becomes noticeably better. The best thin-crust pizzas I’ve had were cooked in wood-fired brick ovens or on a grill over wood charcoal with temperatures running between 750°F / 400°C and 900°F / 480°C. Sadly, most ovens max out at 550°F / 290°C, making great thin-crust pizza hard to do in the oven. What’s a thin-crust pizza-loving geek to do? If only there were a flow chart for this… 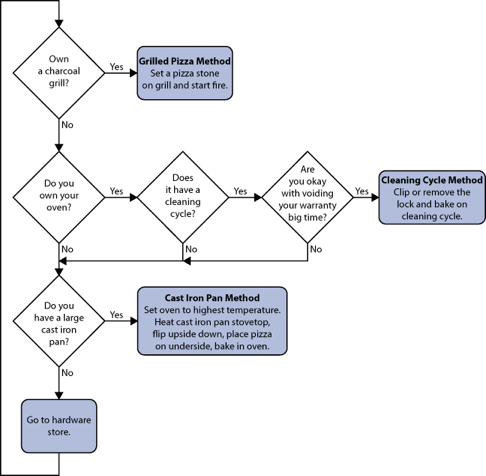 Wood Grill Method
This is by far the easiest method. Grills fueled by charcoal or wood get hot, easily up into the 800°F / 425°C temperature range. (Propane grills tend to run cooler, even though propane itself technically burns hotter.)
Wood charcoal grill temperature: 742°F/ 394°C.
Cooking with a Lot of Heat 371
Place a pizza stone on top of the grill and light the fire. Once the grill is hot, transfer the pizza with toppings onto the grill. Depending upon the size of your grill, you may be able to cook the pizza directly on top of the grill, sans stone—give both a try!
Super-hot Cast Iron Pan Method 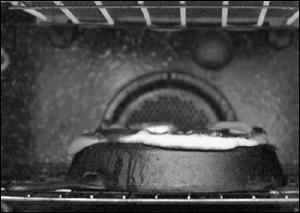 Grill-lusting apartment dwellers have to get creative to create high-heat pizza. While most ovens limit the temperature to 550°F / 290°C, both the oven’s broiler and the stovetop reach higher temperatures. Preheat the oven to 550°F / 290°C, or as hot as it goes. Heat up an empty cast iron pan on the stovetop at maximum heat for at least 5 minutes. Switch the oven to broiler mode, transfer the hot cast iron pan to the oven, flipping it upside down and setting under the broiler set to high. Parbake the pizza dough until it just begins to brown, about 1–2 minutes. Transfer the dough to a cutting board and add sauce and toppings. Transfer the pizza back to the cast iron pan and bake until toppings are melted and browned as desired.
Cleaning Cycle Method (a.k.a. “oven overclocking”) 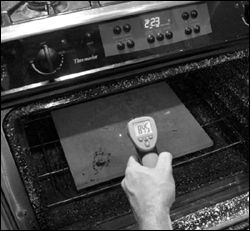 While consumer ovens top out at 550°F / 290°C, that doesn’t mean they can’t get hotter. It’s just dangerous, voids your warranty, and, given that the alternative ways of getting this kind of heat are far easier, is really not worth doing. Still, in the name of science…
Ovens get a lot hotter—a lot, lot hotter—when they run in the cleaning cycle. The problem is that ovens mechanically lock the door, preventing you from slipping a pizza in and out, and leaving a pizza in for the entire cleaning cycle will result in less-than-tasty charcoal.
Cut or remove the lock, however, and ta-da! You’ve got access to a superheated oven. After some fiddling, I took my oven to over 1,000°F / 540°C. The first pizza we tried took a blistering 45 seconds to cook, with the bottom of the crust perfectly crisped and the toppings bubbling and melted.
However, the center of the pizza never had a chance to heat up, so the 1,000°F / 540°C pizza wasn’t quite right. Another attempt at around 600°F / 315°C was remarkably good but didn’t capture the magic of the crispy thin crust and toasty-brown toppings. At around 750–800°F / 400–425°C, however, we started getting pizzas that were just right.
Ovens aren’t designed to have their doors opened when running in the cleaning cycle. Honestly, I don’t recommend this approach. I broke the glass in my oven door and had to “upgrade” it, although it is cool to have bragging rights to an oven sporting a piece of PyroCeram, the same stuff the military used for missile nose cones in the 1950s. Given that an upside-down cast iron pan under a broiler or a wood-fired grill turns out delicious flat-crust pizzas, I’d recommend skipping the oven overclocking, as much fun as it is.
Check back next week for my Recipe: No-Knead Pizza Dough.