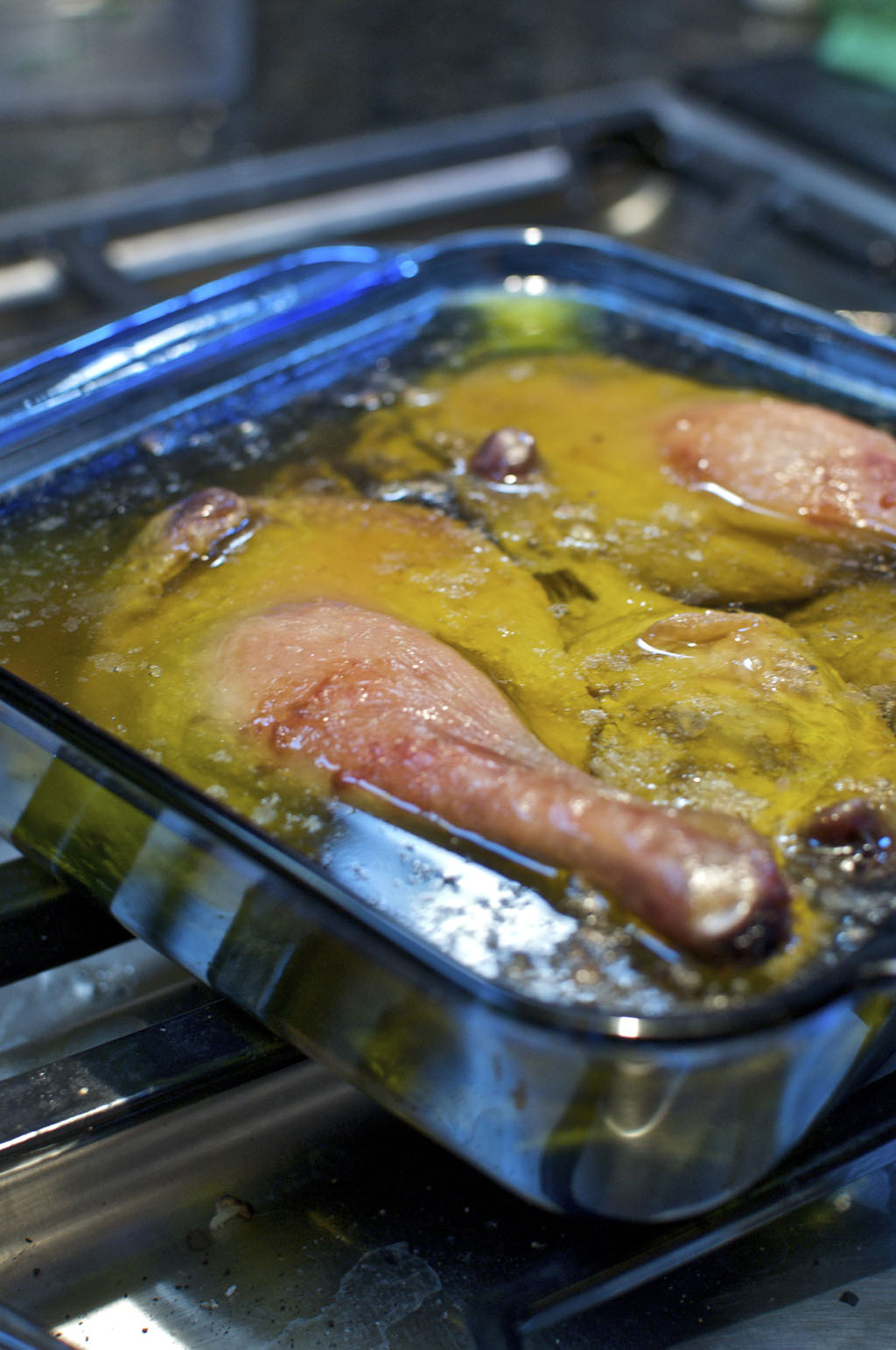 I had my first bite of duck confit in France before I was even a teenager, and fell in love with it immediately. Duck confit tastes entirely different than duck cooked almost any other way; it’s like comparing bacon to pork: same animal, different reality.

Of course, at the time I wasn’t paying attention to the word “confit”, and upon returning to the US, ordered “duck $whatever” ever single time I ate out. It never worked. I’m sure I ate some amazing duck, but at the time, duck confit just wasn’t cooked in the US.

(Video courtesy how2heros; see how2heroes.com/videos/entrees/duck-confit-sugo for more. They’re amazingly nice folks with a great website… and be kind to me; this was my first-ever video; one take, no script!)

It wasn’t until a good decade later when I was in Spain that I had duck confit again. I was amazed for two reasons: it tasted great, and I knew I hadn’t been incorrectly remembering that very first duck confit.

The secret to duck confit is in the time and temperature, not the actual cooking technique – it’s all about converting tough collagen proteins into gelatin. While this isn’t a fast chemical reaction, it’s a simple one to trigger: hold the meat at a low temperature for long enough, and the collagen proteins unwind, denature, and eventually hydrolyze.

Upshot? You can make duck confit in a slow cooker or in an oven set at an ultra-low temperature; and the fat that the duck is cooked in doesn’t matter. Some experiments have shown duck confit cooked in water and then coated in oil is indistinguishable from the traditional method. Regardless, definitely skip the exotic block of duck fat; duck legs are already expensive enough as it is.

Cure the duck legs for a few hours by rubbing salt into the outside of the duck legs, covering both the side with skin and the sides with meat exposed. I use roughly 1 tablespoon / 18 grams of salt per duck leg; you want enough to thoroughly coat the outside.

Place the salted duck legs in a bowl or plastic bag and store in the fridge for several hours. (Store raw meats in the bottom of the fridge, so if they drip, the runoff doesn’t contaminate veggies or ready-to-eat foods.) Salting the meat adds flavor and draws out a little bit of the moisture, but if you’re in a real rush (Five minute duck confit!), you can skip this step and just lightly coat the duck legs with a few pinches of salt.

After dry brining the duck legs, wash all of the salt off. (This will allow you to use the gelatin generated as a by-product for other dishes; otherwise it’ll be too salty. If you skipped the dry brine step, though, skip rinsing the duck legs.)

Arrange duck legs in the bowl of the slow cooker or multi-purpose rice cooker. Cover with oil and set to slow cook mode for at least six hours. You can cook the duck legs longer; they will become more tender given longer cook times. After cooking, the meat should be tender and yield with a bit of poking. The skin can either be removed (pan sear it by itself for duck lardons!); or you can pan score and then sear the skin side of the duck to crisp it up. For duck confit sugo, remove and discard the skin.

If your oven goes low enough, you can also make duck confit in the oven—just be careful that you don’t “steam-dry” the meat!


Warning: number_format() expects parameter 1 to be float, string given in /u/c/cfg/websites/www.cookingforgeeks.com/docroot/wp-includes/functions.php on line 412
thoughts on “Duck Confit Sugo”