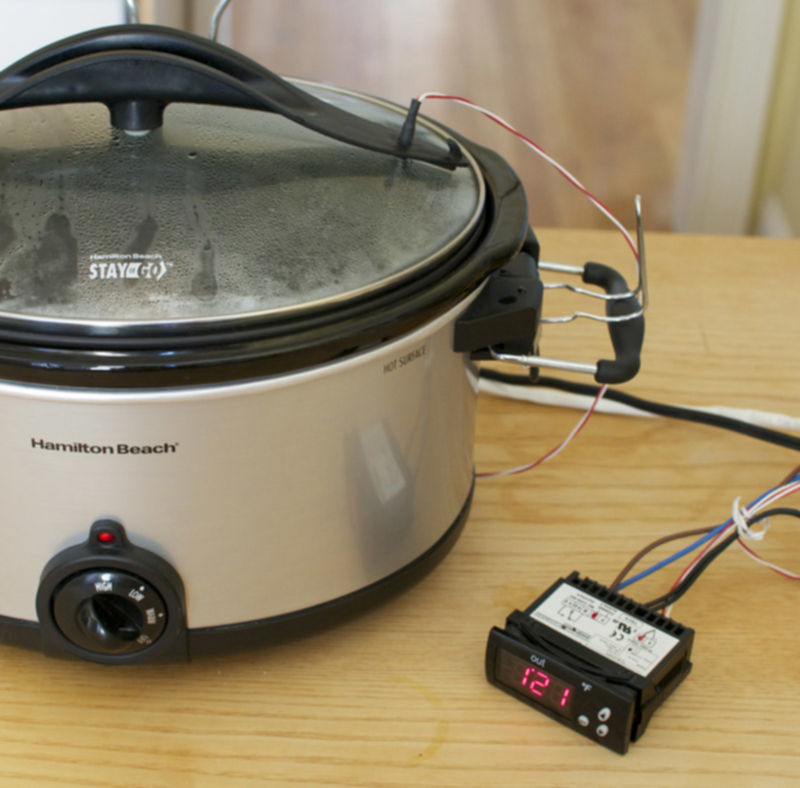 If you’re only going to try one thing from my book, Cooking for Geeks, I’d recommend sous vide—essentially ultra-low temperature poaching. By holding foods like eggs at precise temperatures, you can control which proteins will cook and which ones won’t. Perfect soft-poach egg? Perfect medium-rare steak? Perfect fish? These all become super-easy with sous vide.

Download two free chapters of Cooking for Geeks and get my weekly cooking & science emails:

High-end restaurants use this technique all the time, and with a little care, you can safely do sous vide cooking at home as well. You do need to be aware of proper time-at-temperature guidelines to safely pasteurize any pathogens that might be present, but honestly, it’s quite easy. If you want more details on sous vide, I highly recommend checking out Douglas Baldwin’s “Practical Guide to Sous Vide.” (Or see the first half of chapter 7…)

The pros use a piece of chemistry lab gear called an immersion circulator (units by PoliSci; around ~$1k new). For consumers, there’s at least one unit on the market (Sous Vide Supreme, ~$450). If you have the cash and want something that just works, it’s certainly not a bad option. But if you’re not ready to shell out that much, or want bragging rights to a hacked slow cooker, you can wire up your own version that’s almost as good. Here’s how:

1. First, the slow cooker. The slow cooker will serve as the brawn, holding the water and providing the heat source. Snag a cheap slow cooker—you need one that will turn back on after losing power. Look for one that has a physical knob; the digital ones reset and stay off after power has been cut and then restored.

2. Next, the thermocouple. If you have a standard kitchen probe thermometer (which you really should), the probe—long braided cable, metal probe—is a thermocouple. For a sous vide rig, you’ll need a type J thermocouple, which is made of materials that give it good sensitivity in the temperature ranges of sous vide cooking. This should cost around $15 to $20; search online for “type J probe” or search for part 3AEZ9 on www.grainger.com.

3. Finally, the temperature controller. Just about any thermocouple-based temperature switch will work; look for one that runs off 12 volts DC, such as Love Industries’ TCS-4030, which runs about $75. Snag a 12-volt wall wart (AC/DC power adaptor) while you’re at it.

Take a look at this photo of a piece of meat that’s been cooked via sous vide:

This piece is cooked rare/medium-rare. Perhaps not your personal preference, but the thing to notice here is the lack of any gradient of doneness on it. It’s essentially rare/medium-rare all the way up to the edge. After being cooked sous vide, meats are typically dropped into a hot cast iron pan or placed into a hot oven very briefly to brown the outside, since sous vide cooking isn’t hot enough for Maillard reactions to occur. (The Maillard reaction is the breakdown of proteins and simple sugars, resulting in the characteristic brown color and rich, nutty aromas of roasted meats and baked breads.)

When you cook a piece of meat using a traditional method, you’re essentially steering two variables at the same time: internal temperature (to, say, 140°F) and external temperature (above ~310°F). It’s a balancing act, and timing and application of heat require attention.

With sous vide, though, you essentially make these two variables independent. You cook the meat in an environment of 140°F, taking care of the internal temperature variable; and then finish it off in a super-hot environment to bring the outside surface up to 310°F—but without needing to wait for the interior to come up to temperature, because it’s already there. And because these two variables are now independent, you don’t have to worry about the timing, or about trying to hit the two temperatures at exactly the same time. That’s the magic of sous vide.

Brief Update: It appears the thermostatic controller that I list in the book is out-of-stock for the next several months. If you don’t mind spending a little more money, you can buy a unit that has the thermocouple already connected from Auber Instruments.