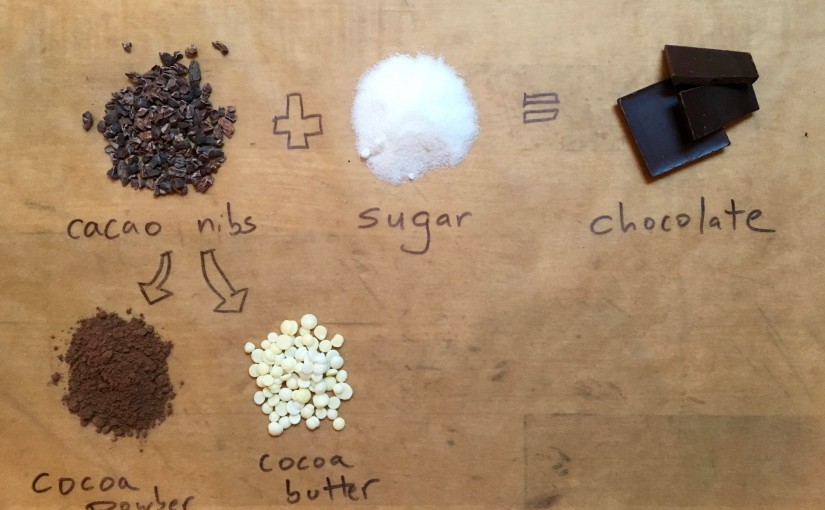 Psst… I’ll be on Science Friday today to talk about this and more — tune in at 3:40 pm Eastern Time! -Jeff

A bar of dark chocolate is amazing—but it wasn’t always this way. Back in 1879, a Swiss entrepreneur by the name of Rudolph Lindt invented a refining process call conching that took gritty, granular chocolate and turned it into the deliciously smooth bars that we enjoy today.

When working on the second edition of Cooking for Geeks, I wondered: what was chocolate like before Lindt’s discovery? And just how hard is it to conche your own chocolate?

Let’s start with fun trivia about the components of chocolate before digging into a simple do-it-yourself version:

Ok, so hopefully that clears up some common confusion around spellings, differences in ingredients, and other “base knowledge” parts of chocolate.

Ok, great—so how do I make a bar of delicious bittersweet chocolate?

But wait, Jeff, I don’t have a conching machine… there must be another way?!

There is, sort of. If you don’t mind skipping the conching, you can make a bar of chocolate that’s unconched. You won’t be rushing out to buy it, though—before Lindt’s improvements, chocolate was generally used as an ingredient in food and drinks, not as a consumable itself.

Still, it’s fun to see what chocolate would have been like before the modern improvements.

For a FULL do-it-yourself experience, you could start with cacao nibs and sugar, heat, grind, and labor away. But we can take a shortcut, albeit unfaithful: cacao nibs are processed into cocoa powder and cocoa fat, so we can use those instead.

Here’s how to make a sample of Unconched Bittersweet Chocolate:

You’ll notice when tasting this chocolate that the initial flavor is astringent and bitter, followed by a sweeter, possibly floral taste as the sugar dissolves in your mouth. Using superfine sugar instead will give a smoother texture, but the chocolate won’t have the same mouthfeel as the bars we are used to, which are conched and tempered.

Speaking of tempering: I’m skipping the details of that here, but for the curious, read pages 158-160 (PDF).

P.S. Here’s what an industrial conching machine looks like: