In a bowl, soak for several hours or overnight: 2 cups (400g) dry white beans, such as cannellini beans. After soaking them, drain the beans, place them in a pot, and ﬁll it with water (try adding a few bay leaves or a sprig of rosemary). Bring the water to a boil and simmer the beans for at least 15 minutes. Strain out the water and put the beans back in a pot (if using an immersion blender) or in the bowl of a food processor. Add to the pot or bowl with the beans and then purée until blended:

• Don’t skip boiling the beans. Really. One type of protein present in beans— phytohaemagglutinin—causes extreme intestinal distress. The beans need to be boiled to denature this protein; cooking them at lower temperatures (e.g., in a slow cooker) will not denature the protein and actually makes things worse. If you’re in a rush, use canned white beans; they’ll have already been cooked.

Variations: try blending some fresh oregano into the soup. Toss some bacon chunks on top or grate on some Parmesan cheese as well. As with many soups, how chunky versus how creamy to blend the soup is a personal preference.

My friend Dawn hates the taste of eggs. As a little kid, she ate eggs that had been cooked in burnt butter. Her brain linked the revolting acrid taste of the burnt butter with the taste of eggs, and to this day that link is stuck in the basal parts of her brain to the point that she can’t eat eggs. A taste aversion—a strong dislike for a food, but not one based on an innate biological preference—typically stems from prior bad experiences with food, often occurring in childhood like Dawn’s burnt-butter eggs experience. A foodborne illness is a common cause.

Taste aversions are fascinating because they’re entirely learned associations. The food that triggers the illness is correctly identiﬁed only part of the time. Typically, the blame is pinned on the most unfamiliar thing in a meal, known as sauce Béarnaise syndrome. Sometimes the illness isn’t even food-related, but a negative association is still learned and becomes tied to the suspected culprit. This type of conditioned taste aversion is known as the Garcia effect, named for psychologist John Garcia, who determined that he could create taste aversions in rats by invoking nausea when they were exposed to sweetened water. As further proof that we’re at the mercy of our subconscious, consider this: even when we know we’ve misidentiﬁed the cause of an illness (“It couldn’t be Joanna’s mayonnaise salad—everyone else had it and they’re ﬁne!”), an incorrectly associated food aversion will still stick.

Sometimes only a single exposure that results in foodborne illness is all it takes for your brain to create the negative association. One of the cleverest examinations of taste aversion was done by Carl Gustavson as a grad student stuck at the ABD (all but dissertation) point of his PhD. Reasoning that taste aversion could be artiﬁcially induced, he trained free-ranging coyotes to avoid sheep by leaving (nonlethally) poisoned chunks of lamb around for the coyotes to eat. They quickly learned that the meat made them ill, and thus “learned” to avoid the sheep. As tempting as it may be, I don’t recommend this method for kicking a junk food habit, but it does hold an odd appeal.

What can you do to overcome a taste aversion? To start with, you have to be willing and open. You may feel that eggs are disgusting, and if you’re unwilling to unwire that association, your chances of eating an omelet are rather low. Repeated exposures to small quantities of the offending item, in situations where you feel comfortable, will eventually remove the association between the food item and negative memory (called extinction). Remember, start with small quantities and use consistent repeated exposures in a supported environment. If it’s too much at ﬁrst, try changing some aspects of the food, such as its texture or the cooking technique, so that the ﬂavor association isn’t as strong.

*See Also: What is Flavor: A Lesson in Orthonasal Olfaction

I wrote this up a few years ago but let it languish in my “thoughts” pile—clicking the “publish” button at last. Following up on yesterday’s comments about the US FDA’s proposal to change the food label by adding “added sugars” with a percent daily value is this below gem. I’m not sure it’s going to make much of a difference, although it’s a step in the right direction.

Naked Juice makes a “green machine” drink with “10 green turbo-nutrients”. Take a look at this screen grab of “the boost inside” a bottle—notice anything? 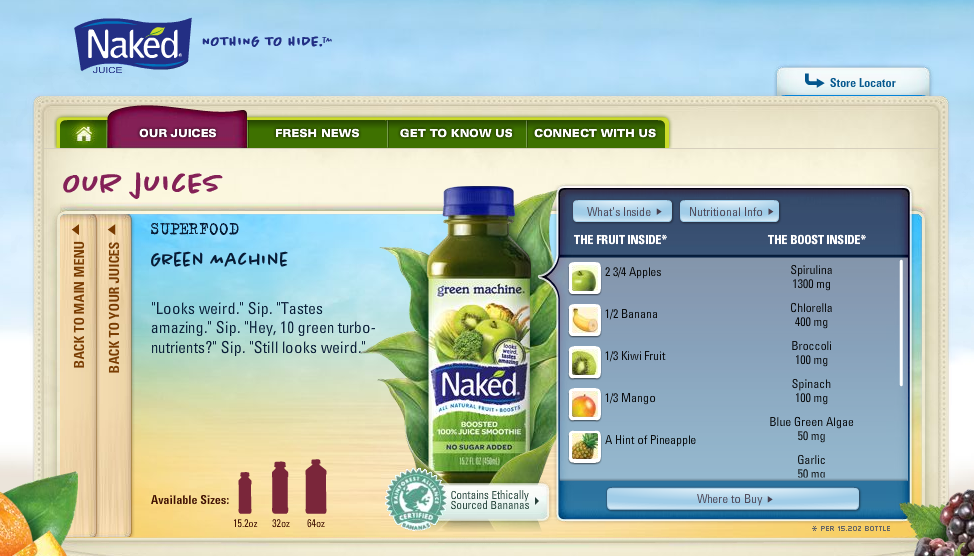 Hint: the qualities of the ingredients are given in mg. Not grams, but milligrams. 100 mg of broccoli = 0.1 g of broccoli. 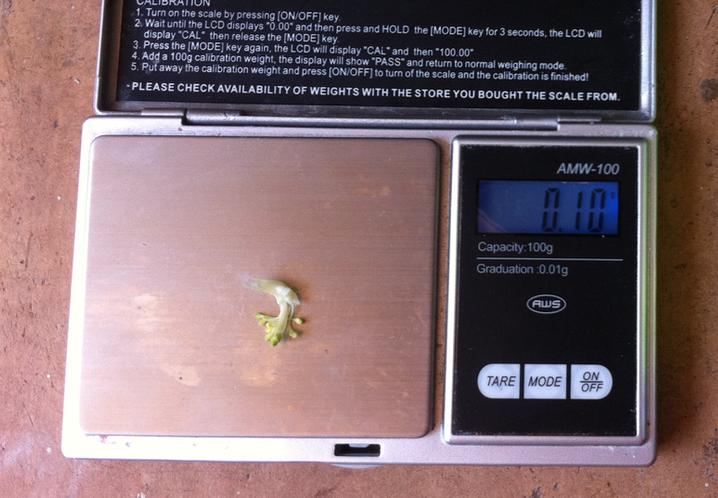 This can’t really be right, can it?

Emails to Naked Juice below.

Hi, I purchased a bottle of ”Green Machine” today and was wondering about the ingredients used in it. On the back side of the label, it says the quantities of fruits and ”boosts” inside, such as 100mg of broccoli. Is that 100mg of straight-up, good ol’ fashioned broccoli, or 100mg of some sort of extract or flavor? Thanks!

Thanks for your inquiry about broccoli in Green Machine. The broccoli boost is from broccoli and is not a natural flavor extracted from broccoli.

We appreciate your business, Jeff, and I hope this information is helpful.

Thanks for your reply! So to confirm, when the label says “50mg parsley”, that means there’s literally 50 mg of parsley in the bottle?

Thanks for your inquiry about the Green Machine label meaning that there are literally 50 mgs. of parsley in the bottle .

Yes, that’s correct! We follow all FDA labeling regulations and as you can see by the ingredients list, parsley and broccoli are actual ingredients in the Green Machine.

What am I missing?

Today’s New York Times has a Well Blog post on the FDA’s proposal to change how sugars are labeled in foods. There’s lots that can be said about this (primarily “Yay!”), but here are some quick thoughts about what I think people are missing about the sugar recommendations.

While there’s lots of evidence that bad diet and obesity go hand-in-hand, don’t jump up and down thinking that by avoiding junk food and “added sugar” foods that you’re healthier. It’s your overall diet that matters. Brian Wansink’s Food & Brand Lab at Cornell University has an interesting study out last month that claims junk food and fast food aren’t correlated with obesity (David Just and Brian Wansink (2015). Fast Food, Soft Drink, and Candy Intake is Unrelated to Body Mass Index for 95% of American Adults. Obesity Science & Practice, forthcoming). I ran it by one well-respected nutritionist and her reaction was to agree: “the overall diet is what counts.”