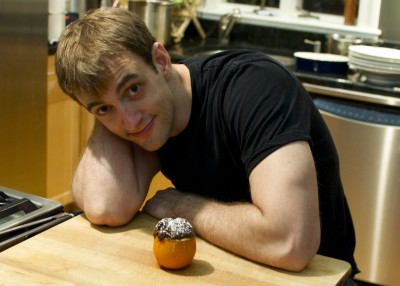 Brownies In An Orange might not strike you as being geeky at first glance, but there’s tons of food science at work as those brownies cook. And if there’s one thing which defines a geek, it’s curiosity and wondering how things works—which is why knowing even a little bit of food science can help you turn out a better meal!

Why set the oven to 325-350°F? Since baking is all about adding heat to the food, you’d think that a few degrees difference wouldn’t matter. But it does! That’s because different chemical reactions occur at different temperatures. Water boils at 212°F. (Well, if you live at altitude, then lower; and if you have stuff like salt or sugar in the water, higher.) But water boiling off around 212°F isn’t the only reaction. Sugar begins to caramelize and visibly turn brown at around 356°F—just above that 350°F temperature! This reaction adds complexity and depth to the flavor of baked goods. You want this to happen for some baked goods—peanut-butter cookies, for example, so we bake those at 375°F—but not other times, such as brownies, where you want the flavors of the chocolate to come through, which is why we bake them slightly cooler.

Why doesn’t the orange burn? Because it doesn’t get hot enough! There’s a lot of water present in the rind, as well as the brownie batter. Think about the cooked brownie: it’s not brittle, dry, and tough—that’s because there’s still a lot of water present after being baked. Putting food into an oven set to 325°F doesn’t mean that the food itself is going to get to 325°F when it’s done. This is why we time how long we bake things—it’s all about pulling it out of the oven once the baked good comes up to the appropriate temperature. A loaf of bread in a 400°F oven, for example, is actually done when the outside of bread gets to around 310°F and the internal temperature is somewhere around 200°F.

Why do orange and chocolate taste so good together? It has to do with the chemicals that make up the odors responsible for each ingredient. Similarity in compounds seems to be a good predictor of compatibility of ingredients. (See foodpairing.be for cool details.) This is why some combinations that sound odd at first actually work together so well. Watermelon and feta cheese? Fantastic, and a great summer-time salad.