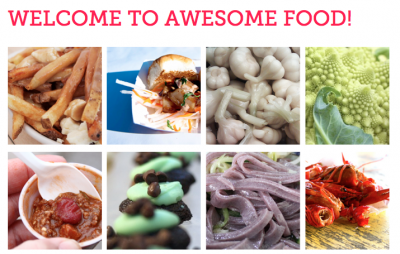 The Awesome Foundation now has a new chapter—Awesome Food—of which I’m a trustee. Details in the below press release!

Awesome Food, a chapter of the worldwide Awesome Foundation, officially launched on Wednesday, July 20 and is now accepting grant applications from around the world to further food awesomeness in the universe. Visit awesomefood.net to learn more and apply at awesomefood.net/apply. The first round for application deadline is end-of-day, Friday, August 5th.

Each month, Awesome Food will give one applicant $1,000 to help pull off an awesome idea involving food. The ideas must relate to food in some form, and the definition will be more inclusive than exclusive. Examples could include educating the public about DIY-farming, creating an ad-hoc eatery in a subway car, or recording videos of immigrants’ recipes.

Anyone is eligible to apply: For profit, non-profit, individuals, companies, schools, adults, children. The $1,000 grants are not be loans or investments. They are not expected to be paid back. They are no-strings attached grants. The Awesome Foundation has a FAQ on how the grants work.

Awesome Food follows the Awesome Foundation model, which creates an independent and self-funded board of trustees who dedicate their time and resources to give out genius microgrants. The current list of Awesome Food trustees and advisors include:

Awesome Food will join the global network of Awesome Foundations, which recently received a six-figure grant fromKnight Foundation to support its activities. The Awesome Foundation originally started in Boston in 2009 and has since grown to be a worldwide network of people with nearly 20 chapters in cities across the world, including San Francisco, New York City, Ottawa, London, Berlin, Sydney, Zurich, among numerous other places. Projects funded have included a giant hammock in Boston, tram sessions in Melbourne, and a fab lab in Washington DC. In addition, the Awesome Foundation recently established the Institute of Higher Awesome Studies as a non-profit.

Awesome Food focuses on helping the world realize awesome ideas to further food and culture. “We’re not entirely sure what ideas we’ll get—that’s part of the fun of this!” said Jeff Potter, author of Cooking for Geeks. “But we’ll know awesomeness when we see it. I’m excited to see what ideas we receive, and can’t wait to see what ideas we can help turn into reality.”