For my book, Cooking for Geeks, I interviewed food scientists, researchers, and chefs; but one of my favorite interviews was the one I did with Adam Savage, co-host of Discovery Channel’s MythBusters. And yes, Adam is just as much fun and as animated in real life as you’d suspect from watching the show.

Jeff: How do you go about testing a myth?

Adam: One of the earliest things we realized on the show is that you always have to have something to compare to. We would try to come up with an answer like: is this guy dead, is this car destroyed, is this an injury? And we would be trying to compare it to an absolute value, like X number of feet fallen equals dead. The problem is the world is very spongy and nonuniform, and trying to nail down a value like that can be really difficult. So we always end up doing relative tests. We end up doing a control under regular circumstances and then we test the myth under identical circumstances, and we compare the two things. In that comparison, we get to see our results.

We did one where we were testing whether or not you could tenderize steaks with explosives. We had to figure out what tenderness is. The problem is you can give two different people each a piece of steak from the same cut compared to a piece of steak from a different cut, and they might come up with two different assessments of which one is more tender. We actually did a whole day of testing that didn’t end up on film because we realized we were using the wrong parameters for assessing steak tenderness. The USDA actually has a machine for testing the tenderness of steak that measures the pounds of force it takes to punch a hole through a steak. We replicated that machine and to our great surprise, it worked exactly as it was supposed to. Coming up with something for $50 that equals the USDA testing equipment: that was thrilling!

Jeff: How can testing a myth translate into learning more about cooking?

Adam: Changing one variable is probably the single hardest thing for people to understand. Change only one variable. It’s not like changing only a small number of variables; it’s really changing one variable at a time, because only then do you know what caused the change between your first test and your second test. You get so much clarity from the process that way.

I’m an avid cook. My wife and I both cook a lot of elaborate things, and we really do love playing around with single variables, changing things and learning how things work. We were reading Thomas Keller, and he talked about how salt is a flavor enhancer, and he mentioned that vinegar does a similar thing. It doesn’t add a new taste, but it often alters the taste that’s there. My wife was making a cauliflower soup, and it was kind of bland. I didn’t want to put any more salt in it, because I could tell it was about to go in the wrong direction. We tossed in a little bit of vinegar and the whole thing just woke up. It was thrilling! I love that.

Jeff: Have you done other myths related to food?

I had a whole episode written called “The Surreal Gourmet,” which ended with tenderizing steak with dynamite, but it had all those other things like poaching fish on your catalytic converter or cooking eggs in your dishwasher. Jamie loves the idea of tenderizing meat in the dryer.

Jeff: I thought of roasting almonds in a dryer, but not tenderizing meat.

Adam: Also, the idea of “is it safe to eat fresh road kill?” We think that would be just hilarious and gross.

A reader sent me a note, pointing out that The Telegraph, of all places, had a video of cooking with roadkill—in their case, a squirrel: 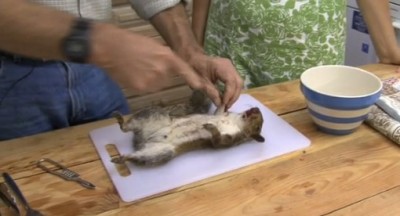